On Friday 19th February 1999 Yallarwah Place was officially opened and born to the Community of the Hunter Region. Yallarwah Place is an accommodation centre for the families of Aboriginal people from the communities of the Hunter and Northern NSW who are receiving medical care at the John Hunter Hospital. It will also serve non-indigenous families as the need arises and is believed to be the first such facility in Australia. It also stands as the first physical act of reconciliation between the black and white cultures in this country. In the words of Aboriginal Elder, Uncle Bob Smith, and Ray Kelly, Chief Executive Officer of the Awabakal Co-operative, it represents black and white people coming together, working together to achieve one goal. If this is what dreams can do, then let's have more dreaming!

Yallarwah is an Awabakal word meaning 'resting place'. It is a place of healing and rest for people and also for the land which we share. Yallarwah was made possible through the vision and dreams of author Paul Walsh who created and directed the Novocastrian Tales project for the Newcastle-Hunter Bicentenary 1797-1997. The funds raised from the sale of the book, along with a generous contribution from the State Government of NSW and many corporate and community benefactors helped make the dream into reality. The Archives, Rare Books and Special Collections Unit of the Auchmuty Library is honored to have played a part in this very important event through the preparation of the portraits of Biraban and The Reverend Lancelot Threlkeld whose relationship spawned the inspiration behind the memorial. These framed works along with the bronze book and plaque, created by Vlase Nikoleski, Head of the School of Fine Art, formed the University of Newcastle's gift to the project.

Acknowledgment of the Ancestors of the Awabakal

Ray Kelly, Chief Executive Officer of the Awabakal Cooperative. Ray spoke of invitation for the presence of the ancestral spirits.

The Prologue from Novocastrian Tales

Words by Paul F Walsh, narrated by Graham Wilson, produced by Professor Robert Constable. A beautiful piece, complimented with the intrusion of a mobile phone, performed by an impromptu embarrassed anonymous owner.

A piece of music composed for the dedication ceremony by Keith Potger, Trevor Spencer and Boyd Wilson. It was performed by Keith Potger. I wondered who this fellow was, he looked familiar…"was he from Redgum?". I learn he is from the legendary Australian group The Seekers. Sorry Keith.

Both these men spoke from the heart concerning the past difficulties encountered in accommodating the Aboriginal families of loved ones in hospital.Uncle Bob spoke of how he once asked the Government for a "house and a bus", they refused. For 15 or so years he carried the dream alive for a special place, and was tearfully joyous at now seeing it become a reality.

After being introduced by John Mills MP, The Honourable Dr Andrew Refshauge MP, Deputy Premier of NSW officially opened Yallarwah Place and dedicates the Yallarwah site as a Bicentenary Memorial for the people of the Hunter Region.

A reading from the Gospel of St Luke

Read in Awabakal by Ray Kelly. This translation into Awabakal was made between 1827 and 1831 by the Reverend Lancelot Threlkeld and the famed Awabakal man, Biraban, in the Newcastle/Lake Macquarie Area. Following Ray Kelly's reading, the Gospel was read in English by Pastor Rex Morgan, Susan Harvey and Jane Gray. 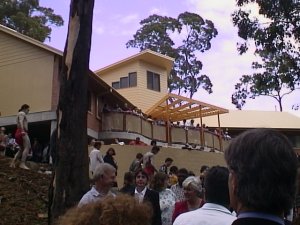 Rowing Down the River

The facility utilised Aboriginal design elements in its construction. It is shaped in the form of an Eagle-Hawk astride a flying boomerang. At this point in the Ceremony the guests form a symbolic Rainbow Serpent/Hunter River. The Bishops, Uncle Bob Smith and Uncle Bill Smith are guided to the River where they enter the symbolic canoe.

Carol Abela, Chairperson of Hunter Area Health, and Phillip Towney, Aboriginal Liaison Officer, John Hunter Hospital and Manager of Yallarwah Place spoke of the design of the building and its connective attributes to the four elements.

Howard Firth, Managing Director of the Newcastle Permanent Building Society, talked of his first meeting with Paul, and how it resembled a wonderful plot to a great tale. He spoke of how his head was saying "No! No! No!" while his heart was saying "Yes! Yes! Yes!" Paul spoke of his inspirational relationship with his wife and paid tribute to his wife's mother and former business partner. He thanked everyone involved with the project, named and unnamed.

The Epilogue from Novocastrian Tales

At this point I beheld the spirits of both Threlkeld and Biraban.

An Australian Language as spoken by the Awabakal The People of Awaba or Lake Macquarie (Near Newcastle, New South Wales) being an Account of Their Language, Traditions, and Customs: by L.E. Threlkeld. Rearranged, condensed, and edited, with an Appendix, by John Fraser, B.A., LL.D., Sydney, 1892.