he University Archives Rare Books and Special Collections are pleased to announce that we have received a fabulous donation of William Morris works from the estate of the late Norman Talbot. The donation was made in November 2004 by Dr Jean Talbot, in memory of her husband who died earlier in the year. Norman Talbot was very much a scholar of the life and work of William Morris (1834-1896). William Morris was an author, poet, artist, manufacturer, and founder of the arts and crafts movement. The Collection consists of around four shelves of books, the substantial portion being two complete sets of William Morris' Collected Works; a limited edition set published between 1910 -1915 of The Collected Works of William Morris. With introductions by his daughter May Morris. London: Longmans Green and Company, 1910-1915. Limited to 1,050 numbered copies (of which 1,000 only are for sale) in twenty-four octavo volumes, and the 1966 edition. His Collected Works published in 24 volumes includes Morris' poetical works, prose romances and essays on art and politics as well as his translations from the classics, Early English, French and Icelandic Sagas. In addition, Norman Talbot's personal Morris Collection includes a number of pamphlets and other works either by or about William Morris. 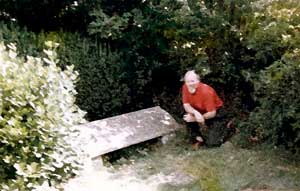 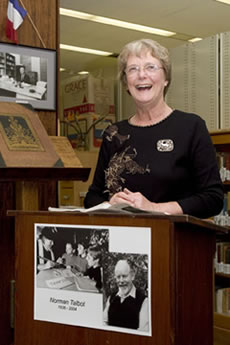 On Thurday 24th March 2005 Dr Jean Talbot officially presented Norman Talbot's William Morris Collection to the University. Mr Gionni Di Gravio, Acting Manager, welcomed and introduced Jean, who spoke of her happiness in having the Collection deposited in the Library for the use of scholars and the wider Community. She also said that she did not recall exactly when Norman first became interested in the work of William Morris, but that it was at least before their first visit to Kelmscott Manor in Oxfordshire in the 1960s, which she described as a 'warm and magical moment.' The Manor lay at the end of a 'grey desolation', to which they were welcomed by a retired American couple who were caretakers of the place, and who kindly looked after their three small children while she and Norman viewed the hangings and the tapestries. She also read excerpts from the Obituary by Peter Faulkner published in The Journal of William Morris Studies 15.4 (Summer 2004): "Obituary: Norman Talbot." Peter Faulkner, 14-15.

On behalf of the University, Mr Greg Anderson, Acting Director and University Librarian thanked both Jean and Ruth Talbot for the donation of this outstanding Collection for the University community.

The official proceedings were then accompanied by readings and reminiscences on the life and work of Norman Talbot and influence of William Morris. Speakers on the day included Ms Amanda Serrano, former student of Norman Talbot, who spoke of the great inspiration and support that both Norman and Jean had given to her; and instilled in her that Universities were there not just to teach, 'but to encourage individual freedom of thought and expression.'

Dr Christopher Pollnitz of the University's School of Language and Media (English) presented a paper entitled "Norman Talbot and William Morris: On the occasion of Jean Talbot’s presentation of Norman’s Morris collection to the Rare Books Collection of the Auchmuty Library " as well as providing a copy of his obituary "Norman Talbot: In Memoriam " that was originally published in Southerly 64, 1 (2004): 115–18.Dr Edward Bridle spoke of Morris' dark age associations, translation of Beowulf, and Rudyard Kipling, and Mr Ross Edmonds ended the proceedings on a charming note with a comparison of the two men of Morris and Talbot as creative visionaries.