Skip to toolbar113083
Open/Close Toolbox
Format: Person
Linked To
PhotographPublicationReference Page
Map
Add
no geotags or polygons yet
Recollections
Add
no stories yet 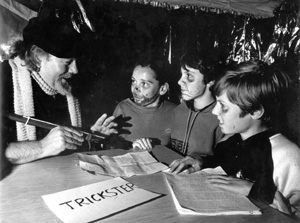 Norman Talbot was a poet, not a person who wrote poems, but a poet. This term defined him in a way that the term blacksmith might have been used in the 15th century. Norman was born in 1936 to farm labourers from an “English village, Gislingham, in Suffolk. Until his death this year, he never lost the ability to do his Suffolk accent even though he hadn’t lived in Gislingham since he was a teenager. It’s a measure of his ability with words that, when he first met his future wife Jean at Durham University, he had successfully decided to have an Irish accent instead of Suffolk because it was more exotic and less working-class.

His actual job, in the modern sense, was lecturer (eventually Associate Professor) in the English Department of the University of Newcastle. He held this job from when he arrived in Newcastle from England in 1963 with his wife and Clare, the first of three children. Norman had many passions including his huge garden in Newcastle full of plants and chickens, the city of Newcastle itself, sport including cricket, soccer and croquet. He read voraciously particularly science fiction and fantasy literature, he was a Quaker and believed in peace, human rights and the environment. But, looking through the study he occupied at home for the ten years of life left to him after retirement, the overwhelming impression would be of a man fascinated by words, particularly poems. The cupboards are full of boxes of books he was involved in publishing, anthologies he had edited and volumes of his own poems. These included his collaboration with artist John Montefiore, ‘The Book of Changes’, his ‘Four Zoas of Australia’ and what turned out to be his last collection of poems published during his life, ‘Every Sonnet Tells a Story’. The study also contained drifts of filing cards and post-it notes covered with his strange runic handwriting – all poems, mostly haiku. There were even exercise books from Stowmarket Grammar School in Suffolk crammed with the poems of a younger Norman. Even then, as the first child from his village ever to attend secondary school, he liked playing with words and trying to outsmart the reader.

During his life Norman worked with many other writers and poets, through Poetry at the Pub which he attended with vigour for many years. Through Nimrod Publications, formed by Norman and other poets in 1963, he published the work of 400 writers from the Hunter Valley. More recently he co-founded Catchfire Press and edited five of its first six titles.

His study was the haunt of a man with incredible energy to whom the term retirement seemed to mean an opportunity to work harder. At his death the piles of papers and computer files in Norman’s study included uncountable poems, at least four novels of his own, and another dozen manuscripts from other people. He particularly liked supervising PhD students and helping new writers with their first manuscripts. He also put immense energy into the peace and human rights movements and even traveled to Woomera to take part in the protests against the detention of refugees. On the evening he died on January the 8th 2004, Norman had laid out a peace t-shirt for a protest vigil he was planning to attend the next day.

Norman would have been easier to understand if he had concentrated on more worldly pursuits. He didn’t seem to care about television, gadgets, cars, new clothes or real estate. A measure of this aspect of Norman’s character is that his will, which was drawn up in 1966, was found on his study desk in a huge mound of papers which also included hand written drafts of poetry, un-cashed cheques, letter from friends and flyers for long passed conferences.

Norman did want an audience for his work and for the work of the people he helped, but he never compromised what he was doing in an effort to make it more popular. He even enjoyed being so intellectual as to confound and frustrate. Above all other things Norman loved his wife, the art of writing and helping others, whether as an editor or a human rights activist.

The following article on the life of Norman Talbot entitled 'A Man Of Letters' was published on the 10th April 2004 in The Newcastle Herald. We thank and acknowledge the author Mr Greg Ray and The Newcastle Herald for permission to reproduce it here:

A Man Of Letters
By Greg Ray 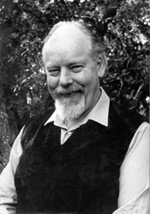 NORMAN Talbot was 19 years old when he spotted the woman he would marry.

She was standing on the railway platform at Lincoln, in England, when he caught the glimpse that would change both their lives.

Whenever he spoke of that moment in his later life he unabashedly affirmed that he instantly knew had seen his bride.

"I suppose it must have been something like love at first sight," Jean Talbot reluctantly admits, though she hastens to explain that it took her a few days longer to succumb to Norman's courteous and attentive charms.

" But I knew something big was happening. That here was somebody who was going to be very significant in my life."

As a matter of fact he was going to be very significant in many lives, a large number of them on the other side of the world in the Australian city of Newcastle where Norman was destined to become a popular academic, poet, publisher and activist.

Born in 1936 in the tiny Suffolk village of Gislingham, Norman was by far the youngest of four sons of farm-labourer parents.

Two of his older brothers died during World War II. The second to die was the only man killed when a Japanese kamikaze pilot smashed into the American aircraft carrier on which he was stationed.

Britain's postwar Education Act meant that, for the first time, intelligent children from financially poor backgrounds were given access to grammar schools and universities. Norman hitched a ride on the tide of change and became the first boy from his village to get a good education. And it was at Durham University that he met Jean, his lifelong partner.

Not long before his untimely and unexpected death from a heart attack this year Norman and Jean returned to Gislingham.

"He found the tree he used to climb when he was a child and he embraced it," Jean said.

In a way, he always remained something of a country boy. He loved nature and he always relished episodes of solitude.

He never relinquished his working class roots either, nor lost sight of the fact that a system based on wealth alone would never have allowed him to succeed.

"He passed the exam to get into Cambridge," Jean said. "But a kind of reverse snobbery wouldn't allow him to go there. He saw it as a seat of privilege. "

It might have been love at first sight between Norman and Jean but it took four years before they married, in Leeds.

The first of their three children, Clare, was born there, before Norman was recommended for a job at the fledgling University of Newcastle.

In those days Australian universities were hungry for well-qualified English academics and they paid the Talbot's first-class fare in return for a promise they would stay three years.

"We did plan to go back. We promised our families we would," Jean recalled. "But it soon became apparent to Norman that he wouldn't go."

Newcastle's lifestyle, climate and opportunities were too attractive.

There were limitations, of course, and religion was one.

Perhaps it was the personal cost of the war that made Norman a pacifist. He had a spiritual hunger, but he wanted a form of worship that would let him express his pacifism. Ironically, it was a Rabbi at university who pointed him towards the Society of Friends the Quakers.

"The Quakers suited Norman. They suited us both. They didn't have priests and they were very egalitarian," Jean recalled.

But in Newcastle the Quakers were, in the mid-1960s, a fading sect. Even today they number just 50 or so in the Hunter, and Jean Talbot says she and Norman had a hand in rebuilding the organisation.

Another element largely missing from the Newcastle scene was an outlet for local poets. Norman took a founding hand in Nimrod Press, which published nearly 40 books before the GST finally killed it off.

More recently, as foundation vice president of locally-based Catchfire Press, he continued to help Hunter and Central Coast authors find an outlet for their work. WAS it hard for two poets to live harmoniously together?

"Yes and no," said Jean, readily acknowledging that Norman's prodigious output sometimes seemed to overshadow her own distinctive muse.

"That was always the danger, but he was very encouraging to me."

If Norman had a fault as a writer it may have been that his work was sometimes too complex for the average reader.

"He loved literary ingenuity and even when people tried to persuade him to simplify things he was only prepared to do so up to a point. I think at one time he expected fame but he had to face the fact that it didn't especially come his way."

He put tremendous energy into some novels, in particular, none of which has yet seen the light of day. He did, on the other hand, achieve notable success as a poet and in 2002 he proudly accepted the prestigious Broadway Prize for poetry.

Norman Talbot wrote many books and had his poems and other writings published in journals.

His retirement in 1993 in no way slowed the pace of his productivity.

"It was a so-called retirement," Jean said. "He worked so hard."

Norman worried about the world and tried to change it for the better, always fronting up at peace vigils and human rights demonstrations. He went to Woomera to protest the treatment of refugees and he wrote poems about what he saw there.

He saw no contradiction in loving poetry and loving sport, being a lifetime fan of soccer, cricket and croquet. He played in a university cricket team called The Venerable Gentlemen and he played soccer until his 40s when a broken leg put him off the field for good.

And he could be flamboyant.

"I made him a caftan when he broke his leg, because he couldn't get trousers on," Jean said.

"But he kept wearing it long after his leg mended, much to the embarrassment of the children."

The Great Hall - Norman Talbot (in foreground), the University of Newcastle, Australia - c.1970s